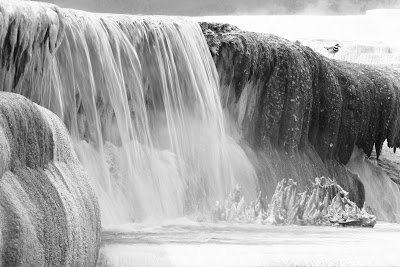 We had a pretty rough day. Getting to Yellowstone was cake. I had the wheel taken away from me due to alleged reckless driving, but managed to do at least three-quarters of today's driving.

Tonight, we are staying at the Madison Hotel - a prestigious sounding name for a bathroom-down-the-hall facility. For about $55 after taxes, we got a cozy room with a sink and one of the most horrifyingly bad views I have ever experienced. In essence, a rooftop, and no more. Nice covered porch out front, though.

Two things scared us, and two things greatly enthused us. Bad news first - mom and I got separated at Norris Geysers, a rather expansive area of active and rather impressive water features. Mom went looking for me after paying a visit to the pit toilets, and I stayed put in what I believed to be the most attractive region of the site - "Porcelain Basin," where several columns of water were in constant activity, others dormant for a long while, but still periodically erupting. Anyway, due to being caught up in the beauty of the place, and lacking anything but yelling as a means of communication, we traipsed around looking for one another for about an hour, until finally we reconnected at the opening of the trail system. Whew.

The second piece of bad news (that was also resolved in a timely manner) was the loss of mom's car keys and unlocker dongle. She found them in her purse. We're all special. (She says she doesn't have Alzheimer's.)

But on to the amazing things - Mammoth Hot Springs, and a couple of wildlife sightings.

Mammoth Hot Springs is home to clusters of "travertine terraces" as they are scientifically called. A special pattern in water flow or structure of mineral buildup causes hundreds of tiny pools to form and host an odd array of colors and temperatures. Water boiling from within the Earth surfaces and cascades down the terraces and cools. The wind was relatively strong, and it made sure that we got our share of piping hot mist and delightful sulfur odor along the paths.

Our animal sighting was a rather unexpected one. Mom has told me many a time that it's super-important to be alert within Yellowstone National Park, as animals may be inclined to mosey about on the road. This proved to be very true today, as we approached a group of stopped cars, whose drivers we presumed to be looking at a large elk grazing beside the road. The two cars in front of us crept forward, but without a care in the world, the elk sauntered into the road, directly in our car's lane. I guess he knew he had complete control over us, physically and emotionally. He might as well have taken a short nap or something equally cute.

Now it's time to load the second batch of photos today - from the hot springs and miscellaneous roadside shenanigans.

Today's photo [will be] of Mammoth Hot Springs' travertine terraces.