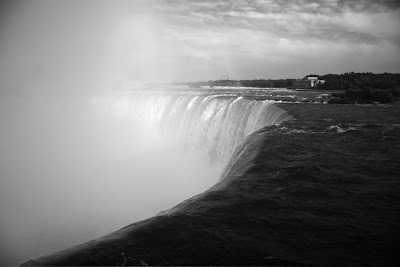 I awoke once again to some weather channel I mistook for "The Price is Right" in our Comfort Inn room. Later in the morning, I did actually hear a bunch of news about Bob Barker, who apparently is surrendering his spot on the show to Drew Carry. TV has done wonders for the mind.

We had a positively terrible (but complimentary) breakfast in the restaurant at the hotel. There isn't much at all to say about this morning, other than that we successfully got on the road and headed toward Buffalo, despite losing an hour the night before. Mom didn't spill her water on the MacBook, either. That was a bonus.

Our plans were unconfirmed, as to where we were to meet our old family friend, George, so that he could give us an insider tour of Niagara Falls. It was quite clear from the beginning that he had a plan and a considerable amount of experience under his belt when it came to timing and sight seeing around the gorge.

The three of us started at the Wind Caves walk, where we received ponchos and sandals for our trek out onto a series of platforms and walkways beneath the portion of the falls which lie South of the U.S.-Canada border. It was fantastic. The spray from the falls drenched the legs of my shorts, but for the most part, we stayed nice and dry under our plastic shields. The camera and phone came out alive, and with a photographic story to tell. One portion of the walkway brought us to within a few feet of the bottom of Bridalveil falls.

After the walk, George paid the $17.50 parking fee, and we rushed across the border to see the falls from the Canadian side. At the Table Rock Restaurant, we got a table with one of the best views I've ever had while eating. We conversed of the great falls and its perpetual rainbow, and we each separately (but with some sharing) enjoyed our meals. Delicious.

The overlook below the restaurant was spectacular. When standing in the right place, one is literally a few feet from the brink of Niagara falls. The water is smooth and turquoise as it begins its descent. Black and white photos still made it look cooler.

After we had absorbed the powerful atmosphere (and about a gallon of water), we drove downriver to the "whirlpool," a huge basin into which the water from the falls flows, hits an impasse, and heads in another direction. We ended up at an overlook where a set of gondola cables ended after going across the diameter of the circular geological gouge.

We drove a little farther, and George showed us another long, wind,y and treacherous rock and dirt path down from a small park. At the bottom, we could touch the raging waters of the lower Niagara River. We kept our footing well. A cliff rose on the U.S. side of the river, but somehow, to my amazement, a photographer had made his way down, and was stationed on a slab of rock jutting into the river a few feet upstream from a river wake created by another determined rock situated on the Canadian side. Nowhere else but Niagara had I felt so small and insignificant in the natural world.

The trip back to our car (we left it in a parking lot near Buffalo, and commuted in George's car) was quick, and, for me, exciting. George's driving style is not too dissimilar to my own, which horrifies mom.

I followed George, he in his Accord, mom and I in the CR-V, to his beautiful home in Rochester, New York, where I am this very moment. I have Vanilla ice cream and cherry pie in my tummy. I'm sleepy.

Today's photo comes from the "Horseshoe" portion of the Canadian Niagara Falls.