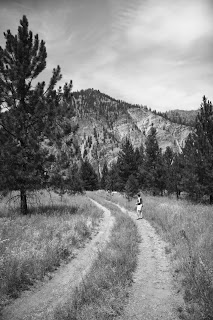 Our projected destination of Butte was easily reached today, our second day on the road. There, though, we only expected to stop at "Matt's," which allegedly made a decent Milkshake. It was just about as disapppointing as Kelis'. (Wake up and experience the stench of pop-culture, people.)

We traveled mostly on I-90, with the exception of a detour to a promising town or two. Idaho and Montana generously and graciously support interstates navigable at speeds another 25% faster than Oregon's. We passed some rather incredible natural rock formations, but also stopped to examine one very peculiar and disturbing unnatural one. The site was the Berkeley mineral mining pit, in Butte, Montana. I don't know the specifics, but it had to be a five hundred foot plunge to the bottom, a height to which you are exposed after exiting a long and confining shaft extending from the parking lot to a small wood viewing platform. The hole grealy resembles the crash site of a large alien space craft that felt it was necessary to spin violently and scar the surrounding surfaces of Mother Earth with concentric circles. Looking upon it granted me one word: horrifying.

The weather was less than ideal, but it made for some interesting and new experiences - some thunder and lightning storms, some intense rays and some simply gorgeous blue sky. It remained unclear if we would continue to be burdened by torrential rain or the menacing black clouds closing in on all sides. Luckily, we were able to enjoy a decent amount of temperate (but muggy) air, and Bozeman, in all its apparent wealth.

We're in Bozeman now, at the Imperial Inn. The town exceeds my expectations. I thought it would be dumpy, full of redneck lowlife, and built around the mining industry. Our only inkling that Montana is an oddball state was something called the "Testicle Festival." Seriously, what the heck? Rocky Mountain Oysters are for loonies or meth addicts. Or something. Point being, you don't often see a sign on the freeway advertising a celebration of the disembodied cojones of what we hoped were only animals. We failed to spot Borat.

For $69 we managed to slip into this hotel; cozy, but bare. Free ice to replenish the cooler, and decent beds - at least they beat a collapsed davenport. A sweet and coveted bonus was free Wi-Fi, from which this entry was posted.

Today's photo comes from a logging road West of Bozeman, just after our beloved testy-fest.

We are here.
Posted by August Miller at 8:11 PM