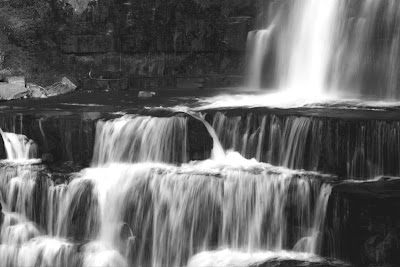 This entry's title comes from a song on Gabriel and Dresden's self title album released in 2006.

Today's main attraction was the active little town of Cazenovia, mom's childhood home. We visited a few of her most memorable places; the elementary school, swimming hole, and most importantly, her old house.

Since I only know the house from photos, I was unsure how to feel. The house had obviously been altered since mom lived there. Porches were missing, the yard had undergone huge transformations, and the forest was cleared and replaced with a lawn, albeit a very well groomed one. Beyond those changes, I am shortchanged on knowledge of the land. Those are mom's treasured memories.

Before leaving, we made a stop at a gentrified (but very rustic-looking) coffee house, "Common Grounds" for some espresso and ice cream. Although it was soft-serve, it was still greatly enjoyed. The last distraction was a vintage car club show, where I was extremely disappointed to find a PT Cruiser, of all cars. The nerve! The idea; how absolutely abhorrent!

We were out of the town in a jiffy, but making slow progress through the wealthy suburbs North of the main street. Our last stop before making (somewhat) serious progress was Chittenango Falls. After seeing the Upper- and Lower-Yellowstone falls (or what I believe was named such) and Niagara falls, I was impressed. It was beautiful, and completely alone in the woods, undeveloped and not commercialized, like so many of this country's wonders.

For lunch, we stopped in Skaneateles, on one of the Finger Lakes. I wasn't hungry, so I spent a good chunk of time lying in a waterfront park with my eyes closed, pondering the meaning of the universe, or something as deep (and pointless) as that.

We projected a final destination for today at Amsterdam, New York. We found a hotel which claimed in its title to be the "Best Value," but so far, we've concluded it's the "best value" only because it's the only business in the entire city.

Never in my life have I seen a city composed of so much nothingness. Wow. Searching for "Food" on Google Maps in Amsterdam yields about ten pizza places and not a decent restaurant that would have any promise of being open. We ended up finding a "Stewart's" shop (which manufactured and carried "Stewart's" soda with a similar logo to the other nationwide company - they're not the same though...), whose employees suggested we go to a part of town that was completely disconnected from the only part that was visible or evident from the Thruway.

Going up highway 30 a mile or so, a strip of mainstream franchises dominated both sides, and signs polluted the dark sky with glows of corporate greed. We surveyed the possibilities, and finally decided that salads at Wendy's were our best bet.

Back at the room, we ate, accompanied by a strange odor produced by the air conditioner, and avoided the horrific reality which we will likely be subjected to in the morning; Amsterdam.

Today's photo was taken at a landing on the way to the base of Chittenango Falls, north of Cazenovia, New York.