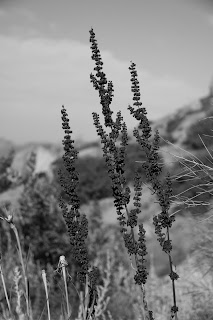 I am going to deviate from the usual haphazard construction of the previous entries, and basically provide a detailed list of all the things we accomplished, fun or not. Makes sense, right? We'll see.

Unsure of what had happened in the past hour or so of my mom's awoken state, I rose to the sound of what I could have sworn was Bob Barker's "The Price is Right." I was surprised to discover that it was a local news broadcast. Not that there's a difference any more - I just didn't think that there was anyone as well-groomed and deep-voiced as Mr. Barker on any news team... I found myself in the same underdressed bed that I so hesitantly accepted as the only alternative to sleeping in the car.

After a quick shower and a complete evacuation of all our belongings (take it how you like), we headed down I-90 to Hardin. On the way, we stopped at the Pictograph Caves State park. Great caves, but no pictographs. I'm positive it wasn't just the early morning sunlight.

We found a small café in Harding. I had a delicious Belgian Waffle with eggs and bacon, and mom had French Toast. Luckily we aren't South enough for people to call it Freedom toast. It sure feels like they would though. We talked with the waitress about the best route to Devil's Tower - Highway 212 or continuing on I-90. We learned two things: A family of three rolled their car four times, killed both parents, and severed a child's leg, and there's a pretty gas station somewhere along one of the highways. Somehow I pitied her, and her simple lifestyle.

It's hard to figure out exactly what went wrong with South-Central Montana and North-Central Wyoming, but there is basically a void between Yellowstone and Spearfish, South Dakota. [Insert from Mom: One thing Gus forgot, perhaps because he was dazed from all the sun, was Little Bighorn Battlefield in Montana. It was a sobering place, not as sobering as Wounded Knee would have been, since the Indians won at Bighorn and it was a battle instead of a massacre of innocents. We sat in on a very informative ranger talk so we got all the military maneuvers and logistics set in our heads, but still it was hard to look out over the peaceful, windblown prairie and imagine the bloodshed. We duly noted the spot Custer supposedly fell, but were more interested in the more recently installed tribal memorial which listed the tribes and warriors who fought there. I found myself feeling the most empathy for the hapless horses who were buried on the spot. Back to Gus...]

On our way to Devil's Tower, we encountered exactly one hallmark town. Buffalo, Wyoming. We stopped for lunch, as the local hangout soda fountain seemed very attractive. The espresso shop caddy-corner from the parlor was a magnet for mom's affliction. No – addiction. No – passion. Sorry. I'll admit it was pretty cool, vaulted ceilings and all.

It was clear sailing all the way to the basalt rock protrusion. This, unlike Old Faithful, was enticing and magnificent. Although not nearly as lively as the geyser, Devil's Tower has a supreme serenity, an overbearing sense of power. Even at the edge of the National Monument, where it is merely a bump among the trees, the rock is foreboding and holy.

By the time we finished with a series of panoramas looking back on on the sunset, Devil's Tower silhouetted, we got back on the road. We made it across the Wyoming-South Dakota border, and ended up in Spearfish, a couple dozen miles Northwest of Rapid City. The Days in there was all booked up, but the dude behind the desk was kind enough to make some recommendations, including the Spearfish Creek Motel. Just across the road, we found a great deal on what proved to be one of our better accommodations this whole trip. Clean, nicely decorated, odorless, and with a pool. Perfect.

Today's photo comes from the pictograph caves, just prior to entering "Ghost Cave."